When Doug got me thinking about “Grand Challenges” for Archaeology, large topics came instantly. In Part 1 I indulged in one that I actually feel we might be able to tackle. With this second part I wanted to think on a more microscale, focusing on a “grand challenge” that affects me and my research. There are of course many of these that spring to mind ranging from simply absorbing the vast amount of literature on Bronze Age metalwork to clambering for answers as to why we find so much metalwork buried in the ground. In the end I settled for an achievable challenge I’m facing currently:

How to destroy things best

The initial intention when I planned my PhD was to study the social significance of destroyed Bronze Age metalwork. It was only when I delved further down the rabbit hole that I realised a fundamental issue with this pursuit. We still had no idea how Bronze Age people were destroying things.

What sortof damage was accidental or deliberate?

Was the metal hot when broken?

Were they smacking it with a rock or carefully severing it?

Almost no one has ever looked at this aspect. Over a century of archaeologists deciding objects had been “deliberately” broken and yet no one had ever worked out how. So I took a step back, my logic being: if we can work out how objects were being broken, we might be able to infer the significance of an act, which could lead us, in part, to the why. For instance, a dirk bent over and partly twisted certainly required some metalworking knowledge, maybe even the participation of a specialised craftsperson, and at that point archaeologists everywhere might start jumping up and down yelling the word “ritual” because, quite frankly, that’s just what we do when we don’t understand something.

But no one has ever tested the skill required to do that sort of manipulation. The only recorded experiments into destruction that I can find involve the simple bending of a sword and striking a flat axe with a heavy hammer. Even these modest attempts demonstrated that bending and breaking bronze objects is much harder than one would anticipate.

And this is where my Grand Challenge starts. I have recently been awarded funding to commission reproductions of lots of Bronze Age metalwork intended for use and ultimately destruction. In the next couple of months (or maybe even weeks!) I will begin to gather a small Bronze Age arsenal of axes, spears and swords. The problem I face is: how to destroy them. There has been so little work done on this that this is my attempt at a little dent in the world of knowledge.

Various experimental trips have shown me that by far the easiest way to break a bronze object is to stick it in a fire and hit it. Doesn’t matter what with – antler, wood, stone, bronze – the heat makes the metal brittle and the impact essentially shatters fragments off. Hitting it cold, on the other hand, produces bending before breakage, though leaves limited other indicators.

But what about bending blades so they don’t break? Is that going to be better done hot or cold? There’s little doubt that to make fancy shapes from swords you’d need to heat them to soften the metal, but how to bend it? Levering it around natural features (e.g. a tree trunk)? Or simply using your bare hands? Unfortunately (or maybe fortunately) I suffer from a comparatively limited knowledge of metalworking so judging the techniques and skills required to attempt these practices relies on a combination of my own logic, the advice of experienced metalcasters, and blind luck. 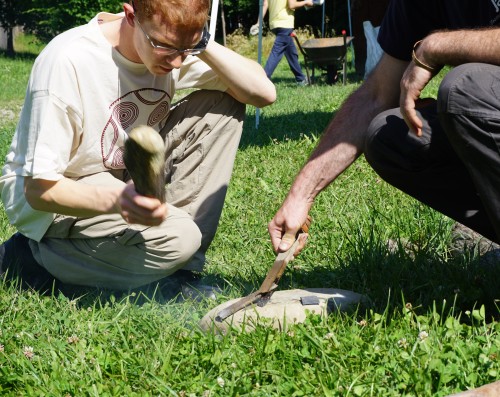 This all leaves me lying awake at night thinking about how can I destroy things best? I’m still toying with ideas but I intend for there to be much fire, lots of smashing and many fragments. No object shall be left intact!

Thanks to Doug for hosting this blog carnival and encouraging me to think about key problems we still face in Archaeology. If anyone has any comments, advice or suggestions on destroying things, I welcome you with open arms. Please do get in contact.

By mgknight21 in PhD Musings on January 28, 2016.
← Archaeology Grand Challenges Pt.1: So where’s your whip? What do we, archaeologists, see as our grand challenges →